Recently there’s been a lot of buzz around Dash Cameras with many “interesting” videos popping up all over YouTube. As a techie it’s always cool to fiddle around with new stuff and I wanted to put such a camera into my daily commuter, a 2012 Honda Civic Sedan.

I wasn’t dying to get a dash cam, but it’s one of those techie things that if it falls in my wheel house I’m going to do it no matter what. And so, I was shopping on Amazon last week and I somehow came across a cheap covert dash cam for $79.99 CDN, and it had good reviews, so I thought hmm at this price it’s worth a shot. At higher price points I was much more reluctant to pull the trigger but this definitely seemed like a good value buy.

The camera I stumbled upon is an Aukey DR-H1, it’s a small well-built little camera. The camera supports up to 32 GB of micro SD storage and records at 1080p. It doesn’t have any fancy bells and whistles like some other cameras do (gps, etc) but I wasn’t going to use those anyways. To be honest I just wanted something that was a “set it and forget it” type of product, just for piece of mind. So let’s get to my install.

What’s in the box? 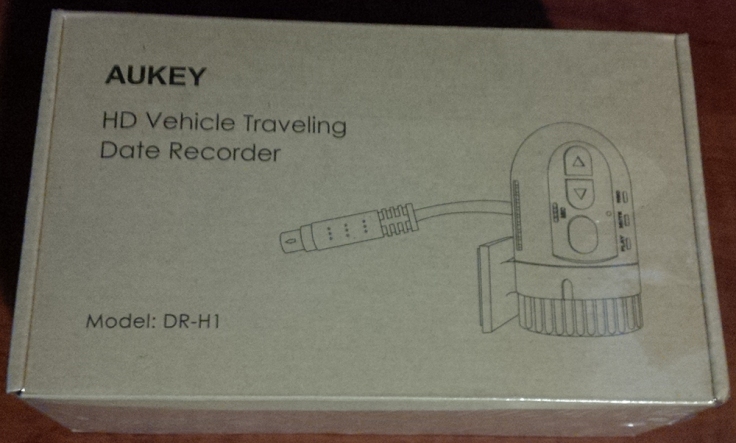 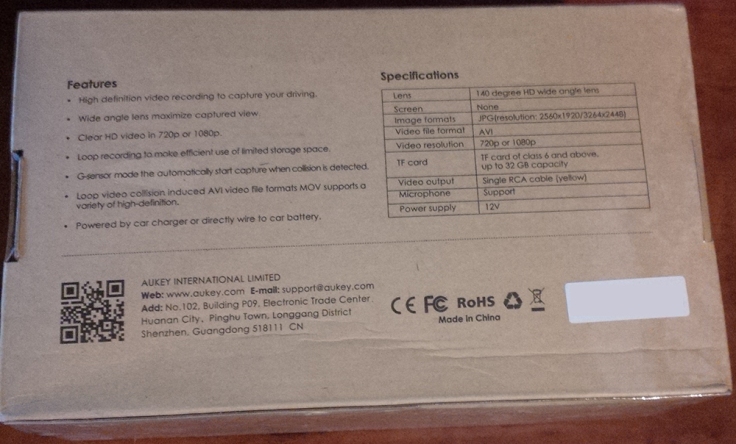 It’s very small and covert when installed, seems solid with great build quality. As you can see it uses the 3M double-sided tape, so once you stick it, it should hold solidly. 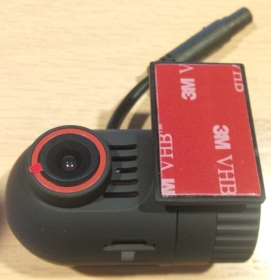 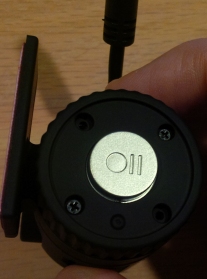 I wanted to go the fuse box route for installation, it’s much cleaner and routing the cable in the civic took minimal time, maybe 10 minutes max. In my opinion, the manual provided did not give great directions for installing the camera into the fuse box. As a first time dash cam installer I thought the camera could just operate on acc power (ignition 12 v), I didn’t understand why the camera needed constant 12v and acc (ignition) 12v so before installing the camera in the car I did some testing externally to better understand.

My testing came to the conclusion that the acc ignition power wire was basically a normally open switch, but when energized, it closed and the camera powered on. It made sense after playing with this, because if the camera were to work just off acc power it would never shut down cleanly unless it had some internal circuitry/battery. What I mean is when the car is turned off, the power to the camera would be cut immediately and the camera would not have had a chance to shut down gracefully. Through testing it was easy to see this, when the car was turned off the camera continued to run for about 3 seconds afterwards. 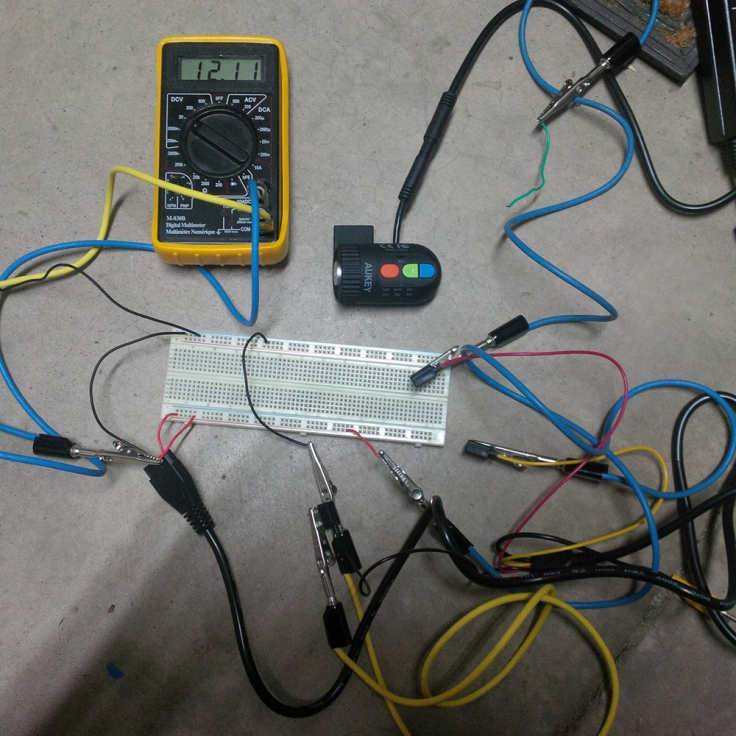 First order of business was to find constant 12v power and acc 12v power… so I pulled out the multi meter and found fuse location 10 (constant) and 23 (acc). There are obviously more possible locations and the ability to tap other spots as well but these worked for me.

Here’s the successful test configuration with the supplied wiring.

The only modification I had to make to the supplied wiring was to turn the black (ground) wire into a usable ground wire for installation. The process is quite simple, it just requires cutting the end of the cable and crimping on a more appropriate end.

There are certainly many spots to ground this off, I picked a location that I thought was suitable for this application.

Install the Dash Cam and Run the Wire

Now that we have everything ready to go, find a spot to stick the dash cam. The most common spot is right behind the rear view mirror so it does not obstruct your vision in any way. I chose to go right behind the mirror just on the right hand side.

Run the wire… it seems daunting but really it’s rather simple as you will find out. I’ve marked the pictures in red to illustrate where the wire is running. 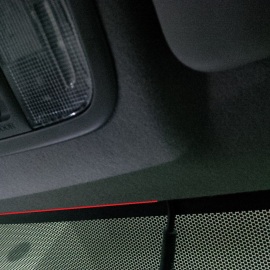 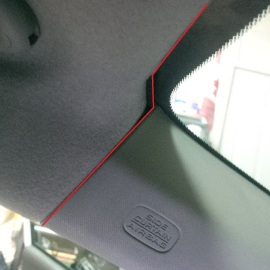 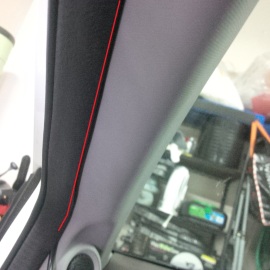 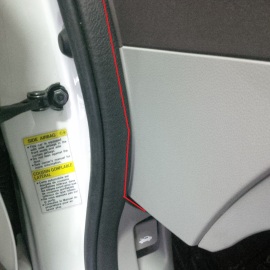 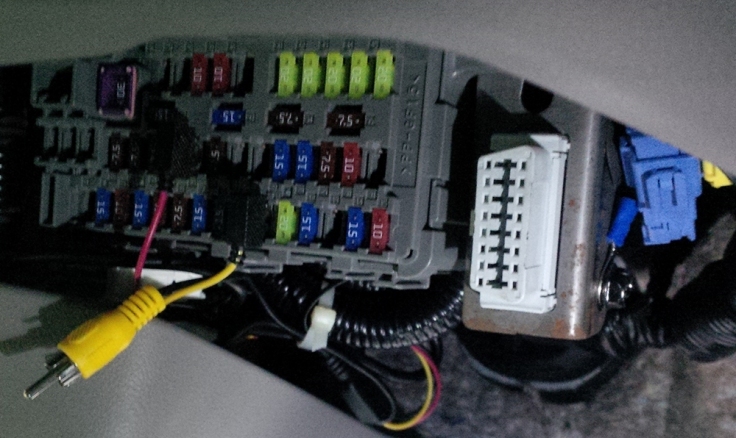 Plug the yellow rca/composite wire into some kind of display. I didn’t have a free TV kicking around so I ended up having to make a custom rca cable with some left over cables I had lying around. I ran it to my TV inside and used Facetime to program it… funny I know but it worked well and rather quickly. This allowed me to configure a few settings, the most important being date/time. 2 other settings of value are the 720p/1080p and the 1, 3, or 5 minute length setting. 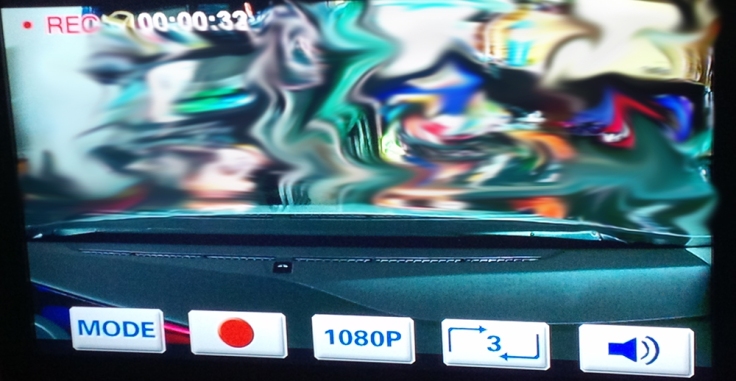 I set my camera to use the 5 minute video length setting. I did some rough calculations and it appears that the camera can record a maximum of approximately 300 minutes of footage at 1080p. The camera is geared to roll over on it’s own, so it’s maintenance free.

All in all it was fun little project, it didn’t break the bank and it was a good learning experience. Overall the camera is not too bad, at night it’s not the greatest but as I always say you get what you pay for.

I’ve taken some video and I have posted it up, enjoy and as a side note I’m sorry about the slightly distorted sound during the night-time clip, my music was a tad too loud.